Adsumudi is a math monster on a mission to make math fun with its namesake game.

To play, find the secret math path to Adsumudi’s answer on each card by adding, subtracting, multiplying, and dividing the five other numbers. Keep the cards you figure out first and collect 5 to win!

Psst! Can you figure out how Adsumudi got its name? Hint: it has to do with ADdition, SUbtraction, MUltiplication, and DIvision!

Different difficulty levels for mathematicians of varying abilities are built right into each card. And in addition to the main rules, there are multiple other ways to play with kids of all ages, including competitively, collaboratively, individually, and even online.

With its compact design and durable cards, Adsumudi is also the perfect math game for kids to take on the road, whether you’re traveling by car, plane, train, or boat!

From the makers of the award-winning math game, Proof!, Adsumudi is sure to be a fast favorite among parents and math teachers alike.

Adsumudi can be played by kids and adults of all ages.

For practicing math facts, Adsumudi is recommended as a math game for grade 3 and up (ages 9+). It's best suited for kids who are familiar with addition, subtraction, multiplication, and division. Although, we've seen kids as young as 1st grade outplay their older siblings!

Cards have a star ranking at top indicating general difficulty level, where 1 star is the easiest and 3 stars is the hardest. So you can split up the deck for players of different abilities. In addition, each card has multiple math challenges ranging from easy to monstrously hard, so there’s something for everyone.

Adsumudi is the perfect complement to math worksheets and flashcards. We’ve been told it’s a monstrously fun way to master the “Operations and Algebraic Thinking” objectives from the Common Core State Standards.

How do you play?

Each player first chooses their own difficulty level for the game. Adsumudi recommends that anyone who hasn’t played yet should start off on easy, then gradually move up to medium, then hard, then monstrously hard. Players in the same game don’t necessarily have to play at the same difficulty.

Get started by placing the entire stack of cards in the center of the table.

At the same time, all players focus on the top card and try to create Adsumudi’s answer (the number in the center) using the five other numbers on that card. Numbers can only be used once each in a given equation, but players can use any combination of addition, subtraction, multiplication, and division they need. 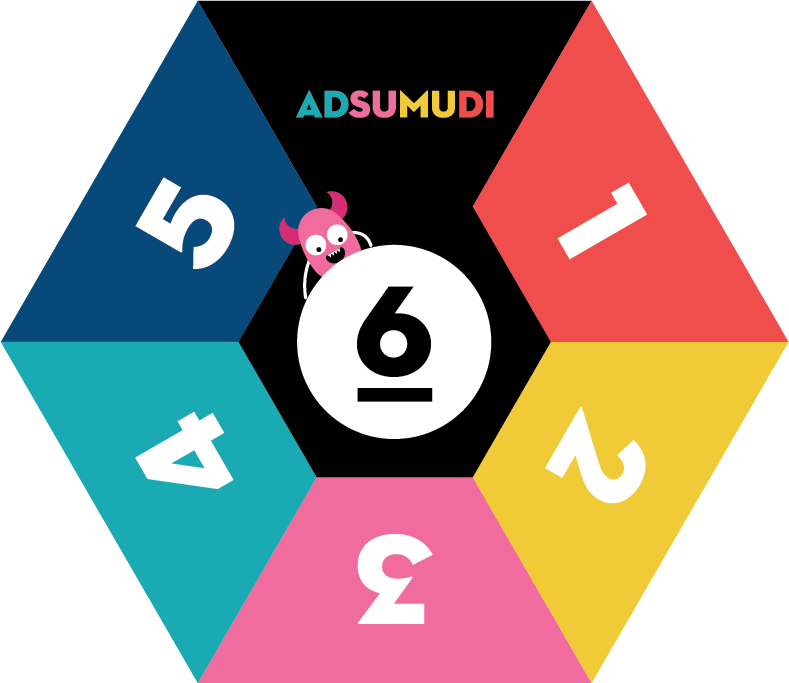 Once any player finds an equation that works for their difficulty level, they should shout “Adsumudi!”. Doing so pauses the game and gives that player a chance to prove that the math works. If it checks out, the player takes the card and keeps it. Everyone then continues playing with the next card on the top of the deck.

If a player’s math doesn’t check out, there’s no penalty. Play continues until someone gets it right. Or if all players agree that a given card is too hard, simply put it at the bottom of the deck and move on to the next card on top.

The first player to collect 5 cards wins! Or for a shorter game, play to 3!

Are there other ways to play?

Yes! Depending on what kind of mood your group is in, here’s a few different ways to play!

Collaborative Friendly!
Instead of competing for each card, players can work together to find solutions. Simply choose easy, medium, hard, or monstrously hard, then see how many cards you can get through as a team!

Around the World Rewarding!
Similar to the Collaborative version, Around the World has players working together to find solutions to all difficulty levels on a given card before moving on. Start by finding the easy solution, then medium, then hard, then monstrously hard. Don’t give up and feel free to grab a hint if you need. It’ll be satisfying to get them all!

Minute to Win It Inclusive!
Give all players pencil and paper, flip over a card, and start a 1-minute timer (or longer if preferred). Before time runs out, all players write down as many easy, medium, hard, or monstrously hard equations as they can find. When time runs out, players share their answers and get 1 point per number used in a valid equation. For example, if the target is 10 and a player finds 2 x 5 and 20 - 8 - 2, she gets 2 points for the first equation and 3 points for the second. Different forms of the same equation don’t count, so you can’t get points for both 2 x 5 and 5 x 2! Whoever has the most points in a given round wins the card. After 3 or 5 rounds, whoever has the most cards wins!

Online Solo Endless!
Can’t get enough Adsumudi? Head to https://www.adsumudimathgame.com/play for endless, new Adsumudi challenges. Click or tap the numbers on the cards to show your work and Adsumudi will tell you if you’re right!

Online Multiplayer Remote!
Is your group of players not in the same physical room? Simply video conference everyone in then have one person screenshare the online game at https://www.adsumudimathgame.com/play. Around the World and Minute to Win It work great for remote play, but the main rules work well, too!

Can I play online?

Ditch the math worksheets for today, and play the Adsumudi math game online for free with endless, new challenges. Click or tap the numbers on the cards to show your work and Adsumudi will tell you if you’re right!

The online game also has helpful hints and solutions if Adsumudi has you stumped.

Looking to play online remotely with a group? Simply screenshare the online game while using your favorite video conference tool. See "Are there other ways to play?" above for fun ways to play remotely with your friends, like Around the World and Minute to Win It. The main rules work well, too!

How many cards are there?

Adsumudi is made by Evermade. Founded in 2016 by Shaun and Lauren Salzberg, Evermade creates, manufactures, and sells award-winning smart games and puzzle books for kids and adults.

Our team is always hard at work creating new family-friendly games. You can sign up for our newsletter or follow us on Instagram to stay up-to-date on new announcements.

All games are available worldwide and proudly made in the USA.

Where can I buy it?

Adsumudi is made by Evermade. You can buy any of our games online. Shipping is always free. You can also find Adsumudi on Amazon, of course.

If you prefer to shop in person, you can find our games in over 100 stores around the world! We support independent game and toy stores and encourage you to shop locally whenever possible. If you would like a list of the stores closest to you, please contact us.

Do you have any tips?

Yes! Use these helpful tips below to become an Adsumudi master!

Tip #3: Split the deck!
Each card displays 1, 2, or 3 white stars at top. These indicate the card’s general difficulty level, where 1 star is the easiest and 3 stars is the hardest. If desired, you can use these to split the deck up for players of different mathematical abilities.

Tip #4: Get hints and solutions!
Stuck on a monstrous card? Get help by going to https://www.adsumudimathgame.com/hints. It’ll give you step by step hints for any card and even show you full solutions if needed.